Nutrition plays an important role in overall health, so it’s wise to carefully consider what you eat and drink every day. After all, while certain foods can provide your body with vital nutrients that are capable of helping to protect against a variety of ailments, there are others that might actually cause an increase in your risk of health problems. In other words, your diet can affect much more than just your weight.

Do Americans follow a healthy diet, or is there room for improvement? What does the average American diet look like? To help shed some light on this topic, and see how this way of eating has been impacting people’s weight, we’ve compiled some interesting stats below.

The Standard American Diet Isn’t All That Healthy

When you think of the standard American diet (also known as SAD), you probably think of foods like burgers and fries. And you wouldn’t be too far from the truth. Here are some stats to show you what the average American eats on a regular basis.

Where Do Americans Get Their Protein and Energy?

What foods do Americans typically eat to get the energy they need to power through the day? And where do they get their protein? Here are a few stats that can provide more insight into what the average person in the U.S. eats on a daily basis.

Americans Can Take Several Steps to Improve Their Diet

There are many things that the average American can do differently if they want to improve the way they eat. Here are some stats to indicate areas that need to be improved.

Many Americans Are Overweight or Obese

A poor diet can lead to unwanted weight gain. And when you are overweight or obese, your risk of certain diseases may increase as well. Unfortunately, many Americans aren’t at a healthy weight, as shown by the statistics below.

Overall, the average American diet isn’t as healthy as it could be, so individuals need to make their own smart choices every day to improve the way they fuel their bodies. By focusing more on minimally processed foods, as well as fresh and natural foods, Americans can get more nutrition with less fat, less sugar, and fewer calories. And those simple steps might help Americans reduce their weight, especially if they also lead an active lifestyle. 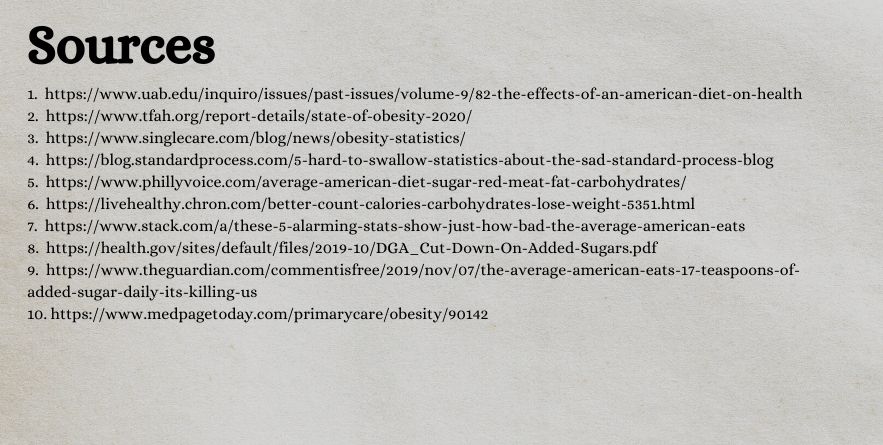